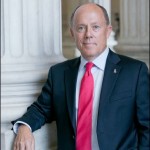 Mark P. Mills is a Senior Fellow at the Manhattan Institute, and a Faculty Fellow at the McCormick School of Engineering and Applied Science at Northwestern University.  He is a co-founder and strategic partner in Montrose Lane, a software-centric energy-tech venture fund.  He was formerly the co-founder and chief tech strategist for Digital Power Capital, a boutique venture fund, where co-founded and served as Chairman and CTO of ICx Technologies helping take it public in a 2007 IPO (later purchased by FLIR), and in addition served on numerous Boards, including as Chairman (and an interim CEO) of a lithium battery start-up. And for seven years prior to an acquisition in 2008 by HP, he was the independent Director on the Board of EYP Mission Critical Facilities, one of the world’s leading data center design and engineering firms.

He is author of the bookThe Cloud Revolution: How the Convergence of New Technologies Will Unleash the Next Economic Boom and A Roaring 2020s (Encounter Books, 2021), which rose to #1 in Amazon’s business planning & forecasting rankings. He authored, previously: Digital Cathedrals: The Information Infrastructure Era (Encounter Books, 2020), Work In The Age Of Robots (Encounter Books, 2018), and co-authored “The Bottomless Well: The Twilight of Fuel, the Virtue of Waste, and Why We Will Never Run Out of Energy” (Basic Books 2005/2006).  About The Bottomless Well, which rose to #1 in Amazon’s science category, Bill Gates said “this is the only book I’ve ever seen that really explains energy.” Mills writes frequently for various popular publications, including the Wall Street Journal, TechCrunch, Forbes, City Journal, Real Clear amongst others.  He has appeared on many radio and TV news and talk shows including CNN, Fox News, CNBC, PBS, NBC and ABC, and on The Daily Show with Jon Stewart. Mark’s online PragerU videos on energy and technology have been viewed over 10 million times.

Mark was earlier a technology advisor for Banc of America Securities, and a co-author of the energy-tech investment newsletter, the Huber-Mills Digital Power Report, published by Forbes and the Gilder Group.  He has organized and served as Chair for numerous Forbes technology conferences, and founded and chaired a series of Digital Power investment technology conferences.  He has been responsible for creating and directing several non-profit organizations including; the Electric Council for the Economy, the Critical Power Coalition (white paper available), and the Center for Science Technology & Media.

Mark has frequently testified before the U.S. Congress and briefed many state public service commissions and state legislators, as well as serving as an expert witness on energy-economic issues.  Earlier, Mark founded and ran an energy technology consulting business with several hundred clients. He served as a staff consultant to The White House Science Office under President Reagan, a number of the Federal Research Laboratories, the (former) Congressional Office of Technology Assessment, and the U.S. Department of Energy.  He worked as science advisor for the Atomic Industrial Forum, and spent the week of the accident at the site of Three Mile Island.  He co-founded and served as Executive Director of Scientists & Engineers for Secure Energy where he worked with a number of the iconic scientists of the 20th century including Dr. Edward Teller and Nobelist Dr. Eugene Wigner.

Early in his career, Mark was an experimental physicist and development engineer for RCA in the fields of integrated circuits and microprocessors in development and production fabs and the RCA Sarnoff Research Center. He also worked at RCA OptoElectronics and Bell Northern Research (NORTEL) in fiber optics, defense and solid-state devices, fields in which he holds several patents.  And earlier, he worked for Eldorado Nuclear (now Cameco), a uranium mining and refining company.  Mark holds a BSc Honours degree in physics from Queen’s University, Canada, and is a member of numerous professional societies including the American Physical Society and Institute of Electric and Electronic Engineers.