From April 2000 through May 2003 my colleague and I co-authored the monthly Digital Power Report (DPR) investment newsletter, initially published by George Gilder, and later published by Forbes. The 36 issues of the DPR mapped out the digital power paradigm – a paradigm we ultimately distilled and expanded in our book, The Bottomless Well.  Our goal with the newsletter was to explain why we consider digital power so fundamental, and highlight what some of the most innovative public companies were doing at that time.  Each month in the newsletter we featured a different technology, and one company that epitomized that month’s technological paradigm.

View a brief overview of the Digital Power Paradigm

We wrote the final issue of the DPR in May 2003 with a brief review of the digital power landscape.  We’re now fully occupied in investing venture capital in this space, and pulling together the underlying science of the digital power story in a book, The Logic of Power (to be published by Basic Books in early 2005).

For the duration of the publication of the DPR, and continuing after the last issue (May 03) through until the end of 2003, Dick Sears maintained an index to track the blended performance of the stock performance of the companies featured in the DPR.  (Mr. Sears is a retired actuary and investment analyst (http://www.gtindex.com), and had no connection to the DPR.)

The performance of this Digital Power Index (DPI) is shown below – duplicated from the last posting of the DPI by Dick Sears.

Makeup of the DPI

The DPI is based on the 35 “Power Panel” companies on page 8 of the final (May ’03) Digital Power Report. 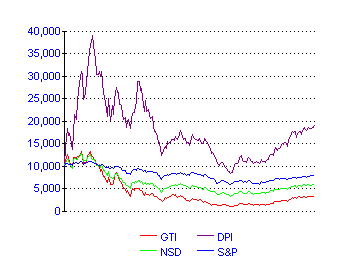 Annual rates of return since the DPI’s April 14, 2000 starting point:

A final authors’ note on the companies that comprised the DPI.

The DPI included 35 companies featured on the DPR “Power Panel” – the index excludes 6 of the 41 companies we wrote about over the course of publishing the DPR.  Power technologies anchored in quantum properties were our exclusive focus from September 1999 through June 2000. Then, before returning to our quantum interests in November 2000, for four months we ventured in to the world of Newton and Carnot, to address turbines, flywheels, and large fuel cells. We continued to admire many of the companies we had featured, but we decided with the May 2002 that the technologies they represented were not at the center of the action that interested us the most. Accordingly, we removed them from the DPR Power Panel that month.  (Dick Sears made appropriate adjustments to the DPI.)

As we have argued from the outset, the stealth revolution in power is centered on the rising power levels that semiconductor technologies are able to handle. Silicon powerchips now switch and process kilowatts of power, not just milliwatts of logic or memory. Laser diodes and RF MMIC chips transform and amplify a thousand times more power than they did just a few years ago. Sensors detect all the various attributes of power with sensitivities 10,000 times greater than they used to. The leading digital power companies are taking advantage of thirty years of advances in semiconductor materials and chip-scale engineering, and trillion dollars of capital already invested to advance the manufacture of logic devices.

Digital power capabilities make possible entirely new applications, or radically improve the capabilities of old technologies.  Digital power devices are integral to the relatively new industries of “Move,” “See” and “Think” (see graph below): from medical implants to semiconductor manufacturing itself (Move); to imaging, sensing and scanning (See); to servers, wireless base stations, PDAs and other data/telecom technologies (Think). All of these applications depend on continuous advances in the speed and power density in their power systems.

Digital power technologies are integral to a different and potentially more profitable process of technology displacement in the old markets for Lighting, Transportation and Manufacturing. These markets are already huge and until recently, they were thought to be mature. But digital power technologies are now invading them from within. They are rapidly invading the huge market for lighting (with semiconductor LEDs). They are displacing much of the mechanical hardware under the hoods of cars, and in old-line manufacturing.

Finally, eventually the electrical grid itself will submit to the new digital power tools. Overall growth of the grid follows the growth in power demand, but digital power has started to invade from within the grid’s electromechanical switches, transformers, metering systems, and control systems, from the largest central power plants to the smallest distributed generators (from diesel engines to solar arrays), from factories and buildings to homes.

The words power and energy evoke images of drill rigs, pipelines, refineries, power plants and the like.  That collective U.S. “energy” industry entails more than $50 billion a year in technology investment – and remains a significant and growing market. But annual spending and investment in power technologies is ten times greater. The power market is increasingly dominated by digital power technologies; silicon drive systems for automobiles, DC bricks on motherboards, semiconductor lighting, powerchips for MRIs and pacemakers, diode lasers in factories, powerchip modules in factories and on the electrical grid. We estimate that digital power technologies already comprise $85 billion of annual spending in the total U.S. power markets. 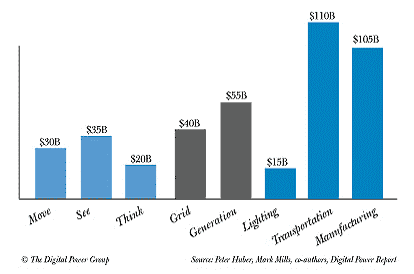